I had an incredible time at the Atlantis Resort in Paradise Island, near Nassau Bahamas. The airport shuttle to the Bahamas is at a fixed price of $33 which includes 2 adults and 2 bags. Additional bags and people are about $3 each. We used a place called Smith’s Taxi Service. Gloria is the owner of Smith’s Taxi Service. She was very prompt during our entire stay there and has a huge minivan that was able to accommodate all of our suitcases. I would recommend giving her a ring if you’re going to the Bahamas. Her number is +242-423-2903 or +242-525-5324.

Money saving tip: For an additional $15 – your cab driver will drive you downtown to a local store and wait for you while you stock up on bottled water and snacks. Bottled water at the local store is $1 per liter. At the Atlantis Resort it will cost you $3.75 for a 16 ounce and $9.75 for a liter. It is well worth the additional $15.

The Atlantis resort is on Paradise Island (referred to as PI by the locals) and therefore you have to cross a short toll bridge to get to the resort. The toll was $1. We arrived at the Atlantis Resort and were greeted by the staff outside who directed us to the front desk. There are five towers at the resort: Royal Towers, Coral Towers, Beach Tower, The Cove Atlantis, The Reef Atlantis and some timeshare property. The Cove has its own pool that is adult’s only. We stayed at the Royal Towers which I think is a prefect location as it’s centrally located.

While checking in at the front desk we inquired about getting a room with a nice view. He punched in his computer and said they had seaside view on the 5th floor or a harbor view on the 15th. He encouraged us to select the harbor view even though, and so we picked that one. It was a good thing as it turned out to be a junior suite with a balcony! 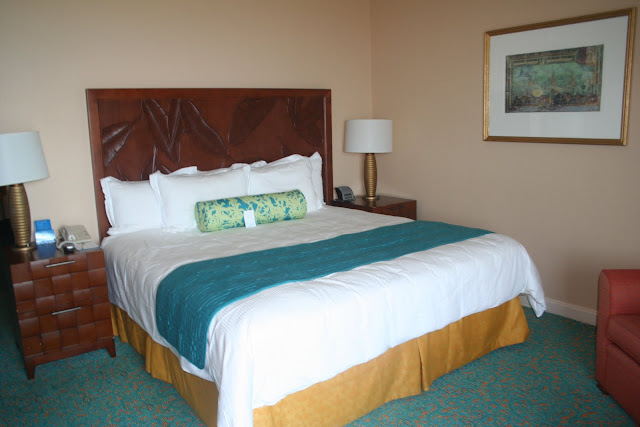 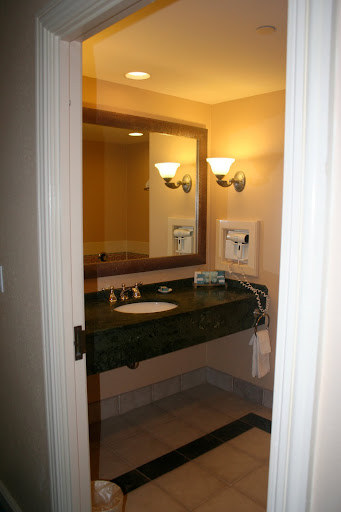 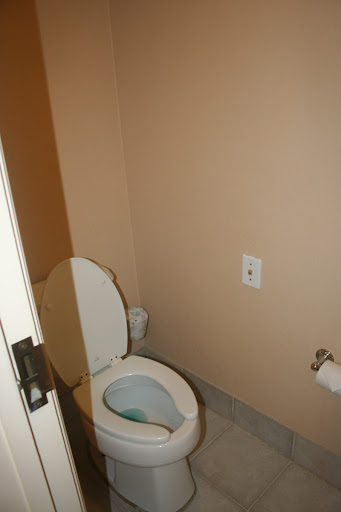 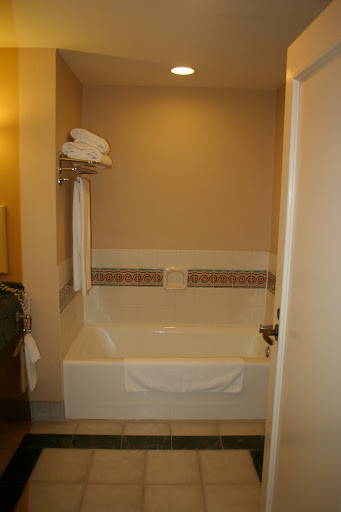 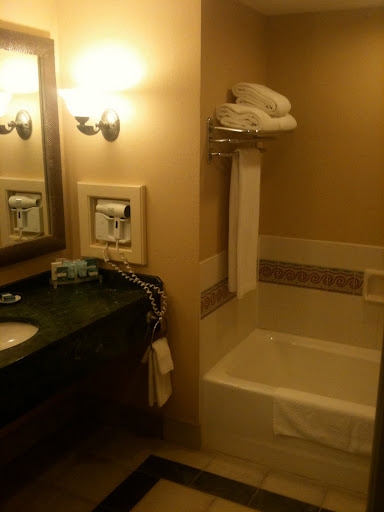 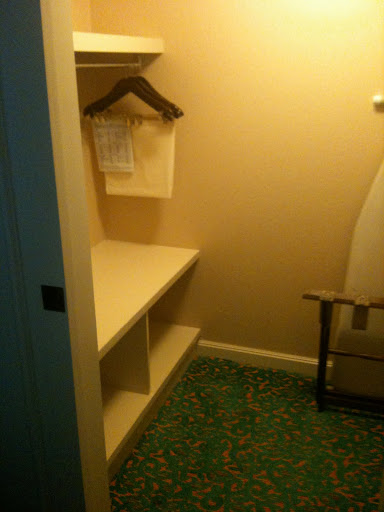 The walk in closet 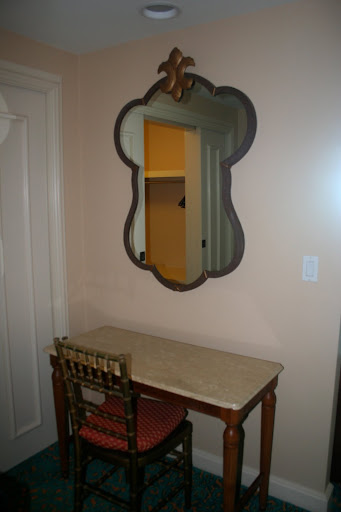 The sitting area outside the walk in closet 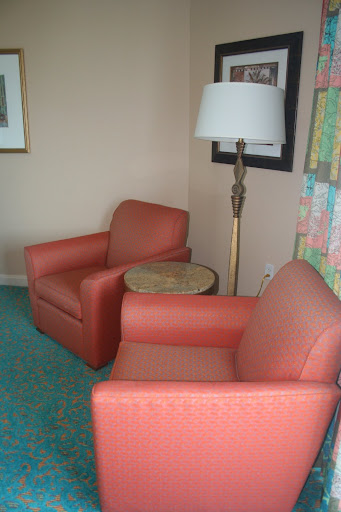 Sitting area in the main room 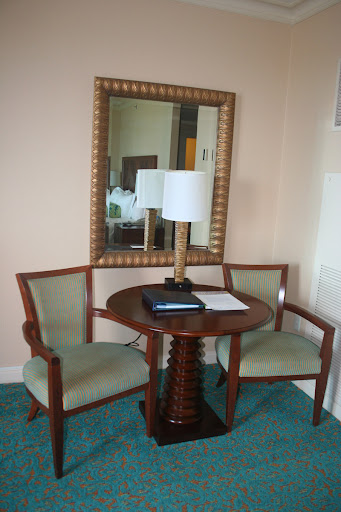 Another sitting area in the room

The food
The restaurants were all quite expensive but there are a few places with a wide price range.

Dinner:
We ate at Chopstix which was contemporary Chinese meeting the Pacific Rim. Entrees varied from $20-$40 per plate and I ordered the sweet and sour pork which was incredible.

Another night tried to go the Mesa Grill – but they have a non infant policy and therefore we went across the way and ate at Mosaic – an upscale buffet with individual cooking stations. The cost was $75 per person. This was by far one of my favorite meals as there was so much variety and just fantastic dishes.

Breakfast
I ate breakfast at Seagrapes which was another buffet with some individual cooking stations. The cost was $25 per person and it was pretty good food.

The last day we ate at the Marketplace at the Royal Towers. This was the same price as Seagrapes but had a much wider selection and much better food. I would recommend Marketplace over Seagrapes for breakfast. However, Seagrapes does have a view of stingrays and small sharks which is interesting.

Lunch
I would recommend eating out by the pool at the Royal Tower at Shark Bites. There is a walk up grill with reasonably priced food – $10 for burger, fries, and unlimited refillable drink. This is the only area I encountered with free drink refills.

The water park
This was by far our favorite part of the resort. There is a huge waterpark right outside the Royal Towers. There is a “lazy” river that is over a mile long. It goes from calm water to category 6 rapids throughout the ride. There are several exits to various areas of the park. The entire lazy river takes about 30 to 45 minutes to go through. We ended up going on this several times. There are free single and double intertubes floating in the river that you just grab.

At one point of the lazy river – you can take a conveyer belt up to the Power Tower. The Power Tower has four different rides there with differing degrees of speed. I would recommend trying all four.

There is also the Mayan Tower with several slides including a race slide that times you down the slide. There is also the main slide called the Leap of Faith that drops 60 feet and goes underneath a live shark tank. 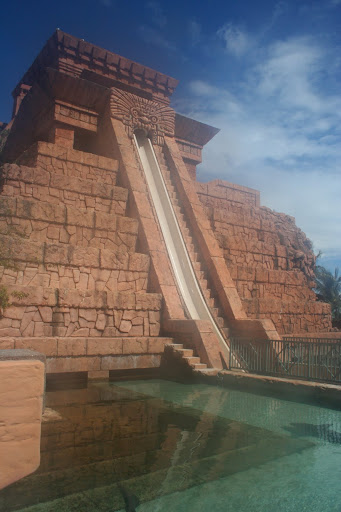 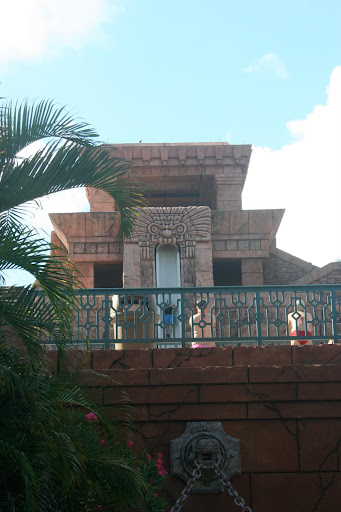 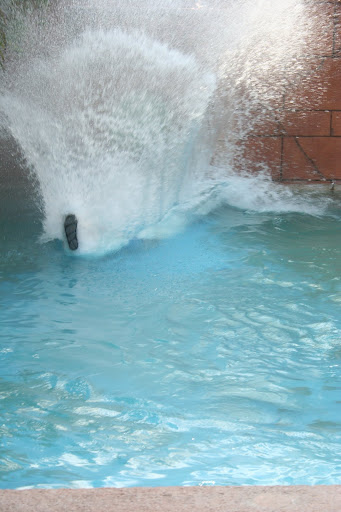 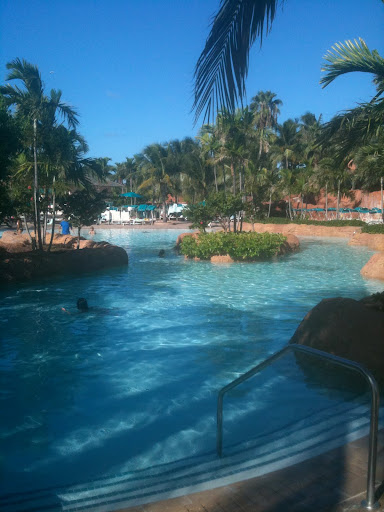 Lastly there are plenty of kid friendly pools with water cannons, slides, place to climb and even places for even the tiniest babies to swim around. There is also plenty of shaded areas and also plenty of chairs that have covered umbrellas on them. 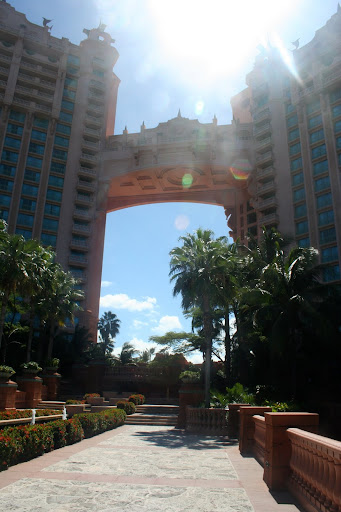 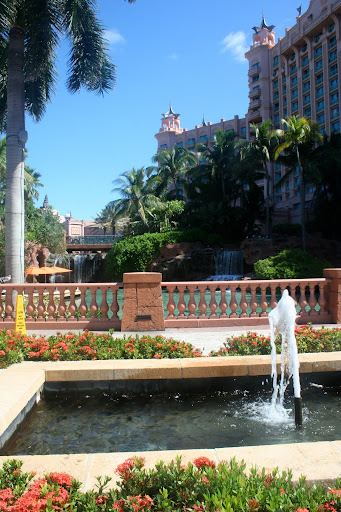 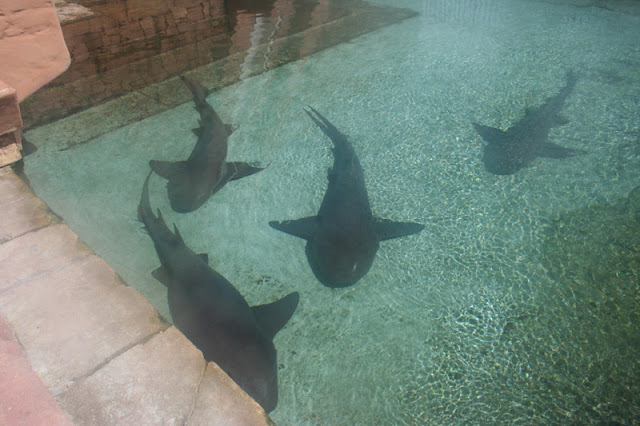 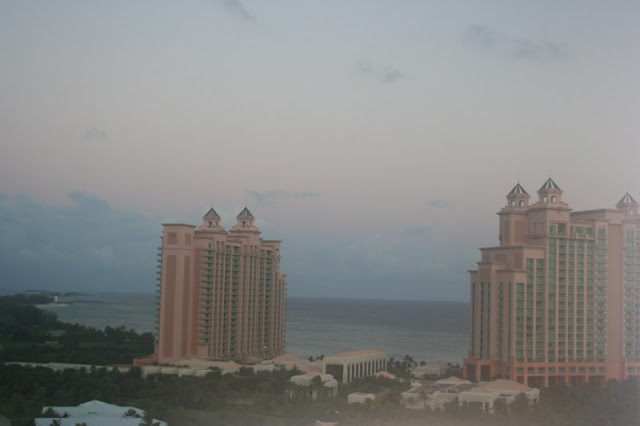 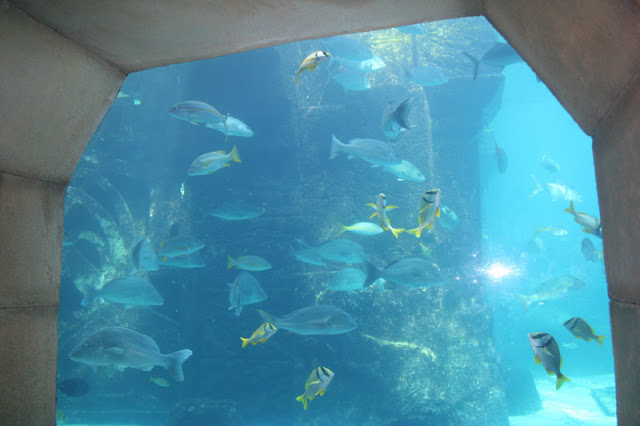 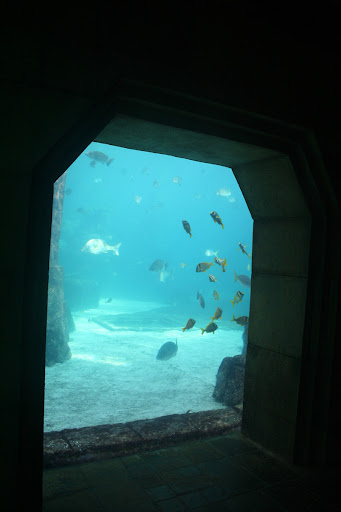 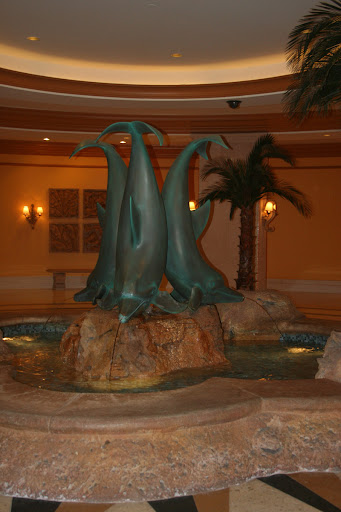 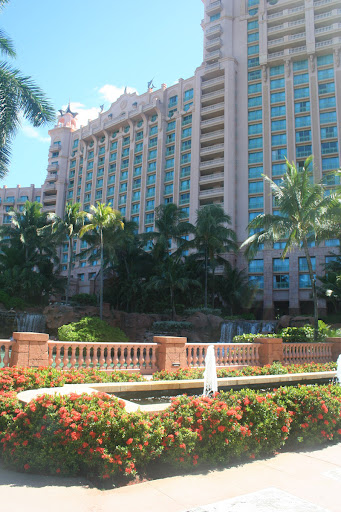 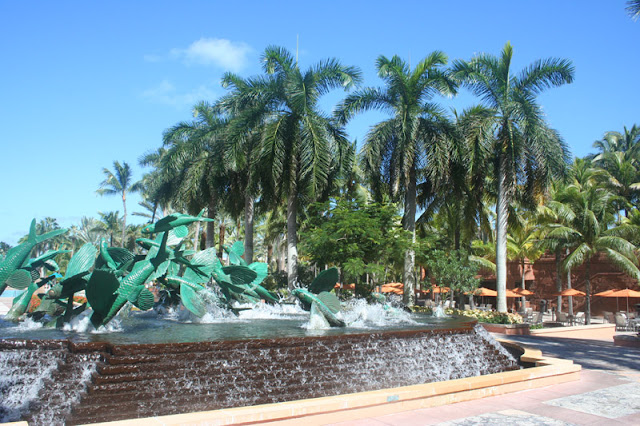 We spent the majority of our time at the water park. We did venture onto the beach at one point. I was less than impressed – the sand was clean enough but the water was completely filled with tons of seaweed. We left after about 15 minutes. The waves were very large possibly due to hurricanes and tropical storms in other parts of the Caribbean, specifically Bermuda. 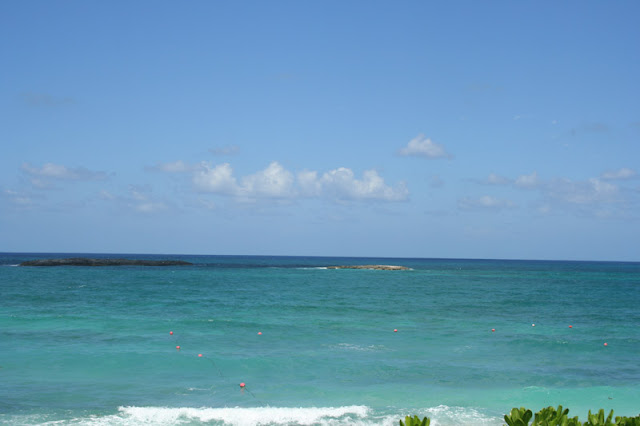 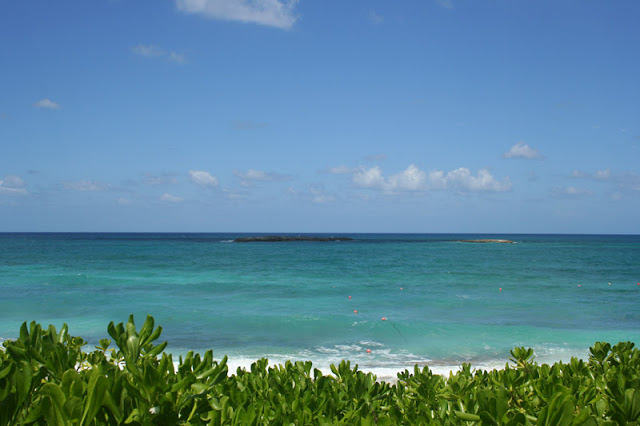 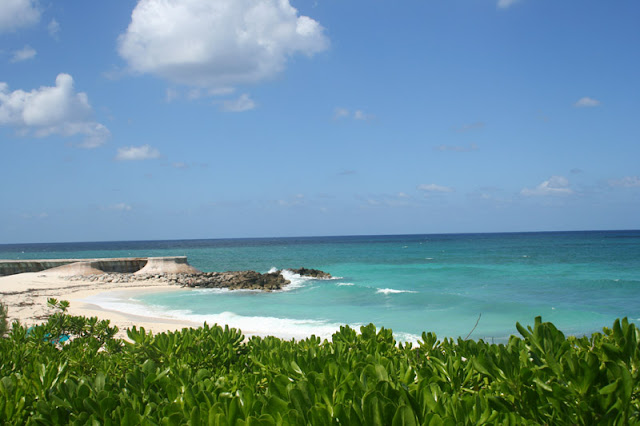 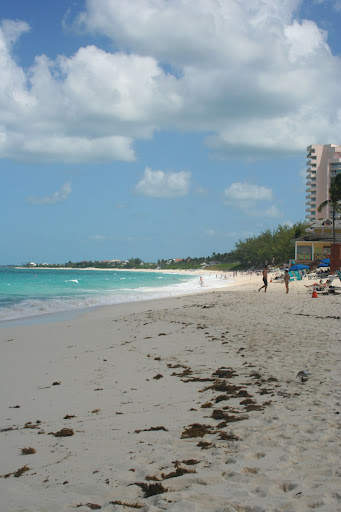 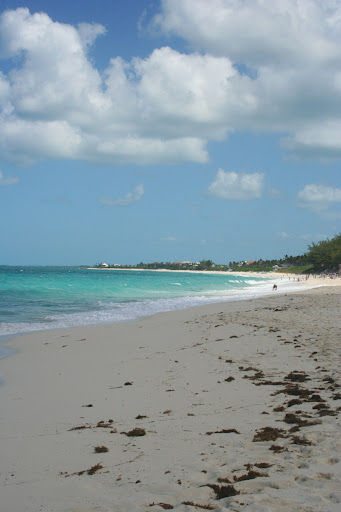 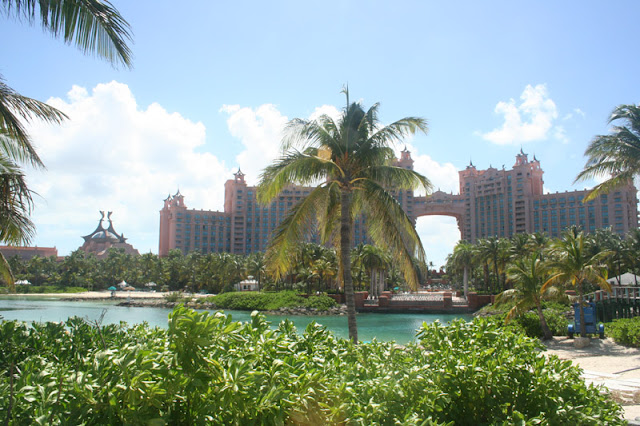 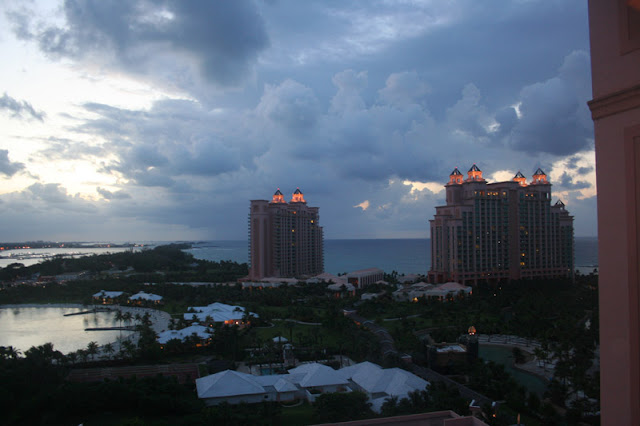 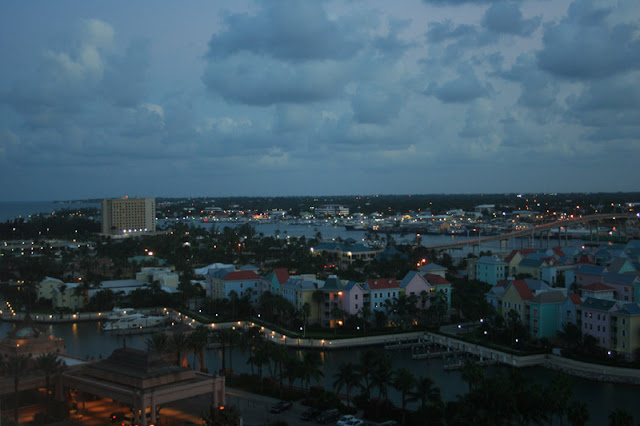 Some other random thoughts, a few pools near the Coral and Beach Towers were closed during our entire stay, I am not sure if there were even any guests in those towers. One or two days there were an abundance of cruisers at the resort with day passes, it made it a little over crowded on those days. The “Library” provides 15 minutes of complimentary internet access per guest per day. Handicap/stroller access seems cumbersome the first day or so until you find the best non-stair routes. After you find your way around, it seems mostly handicap/stroller friendly, sometimes it’s a bit of a longer route, but not impossible. The elevator to the dig/aquarium was out of order twice but staff members offered immediate help to carry my stroller up the stairs. The dig/aquarium is a nice stroll for all ages to look at the fish and sea creatures.

My wife spoke to different staff members and I don’t think they are paid very well, and they appreciated the small talk and respect. They were friendly and often funny.

We didn’t have a lot of time for extra activities since we were there for business meetings and pleasure. Friends did enjoy the dolphin swim and kids’ activities. Most who went fishing on the boats were sea sick, again possibly the recent tropical weather, not sure what is typical for the waves/boats.